I decided to sell off my Nikon gear now that I have have fallen in love with the Fuji x100s. When I sell items online I always like to take pictures that look as attractive as possible to give the buyer comfort that it is a high-quality item in good condition. For this shoot I was inspired by a photo I saw several months back and saved in my inspiration folder: https://www.flickr.com/photos/iluxa/11183703275/  [Click any image for a larger version] 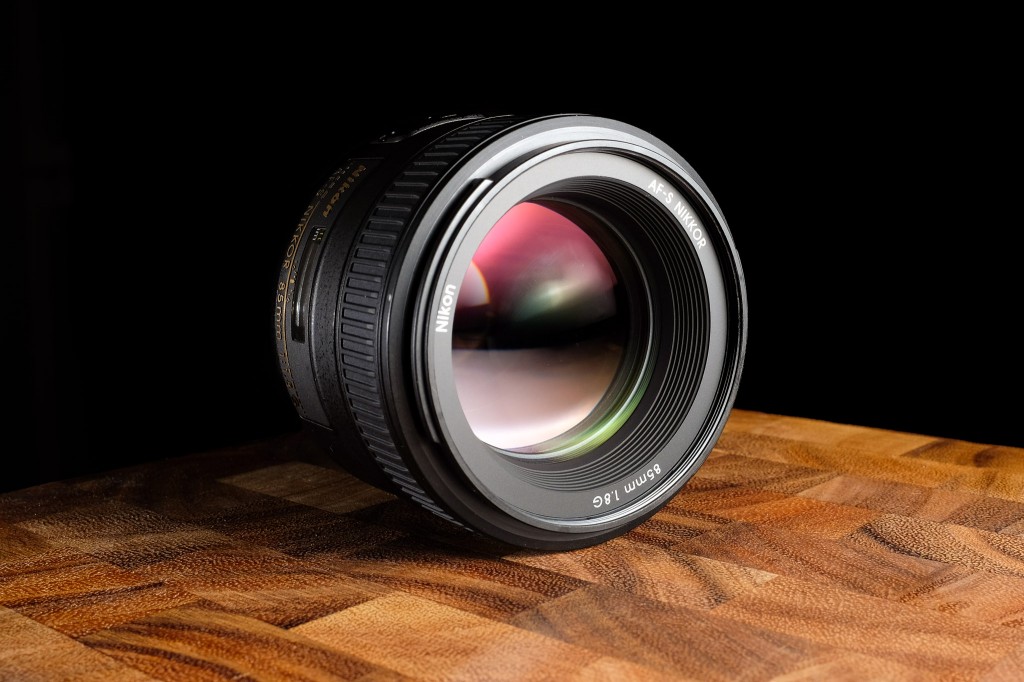 My goal was to come up with a lighting setup that yielded a comparable look. What do you think? By reverse engineering the lighting in my inspiration image I knew I wanted to have a large soft light source on one side of the object and a small hard light source on the other side. I also knew that I wanted the background to go black and to have a nice looking surface in the foreground. 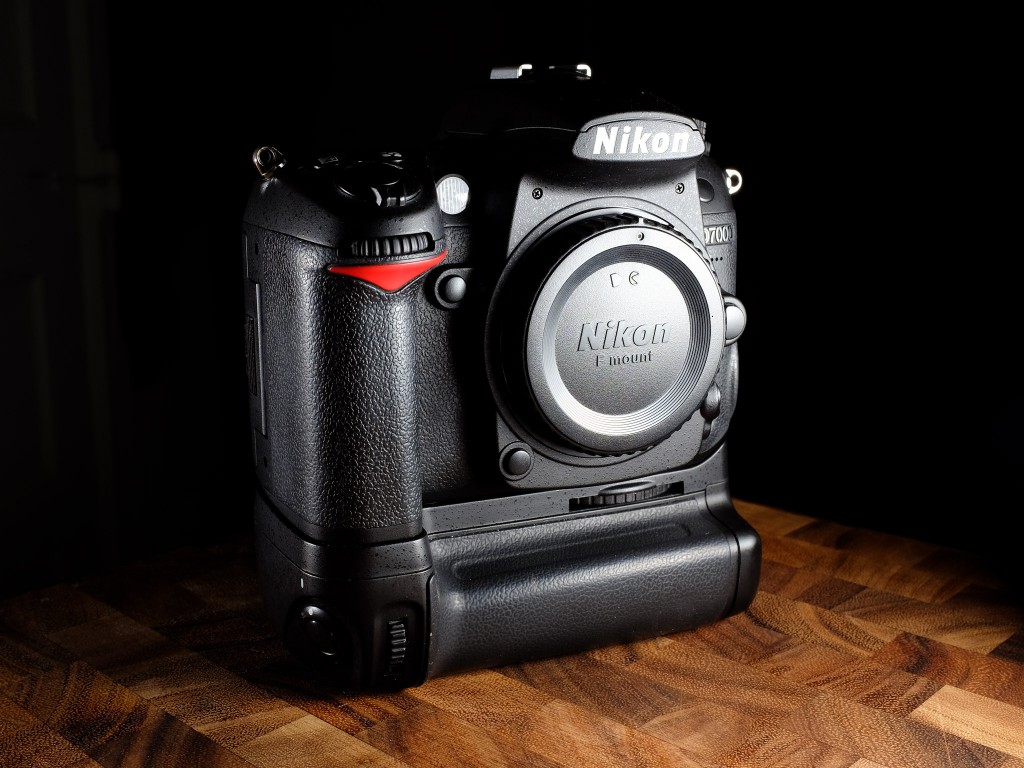 So I set up a cutting board on a cart in my kitchen and placed one flash in a small softbox on the right side, very close. I also placed a second bare flash on the left hand side to provide the hard fill light. Here are two behind the scenes photos so you can see how I set it up. 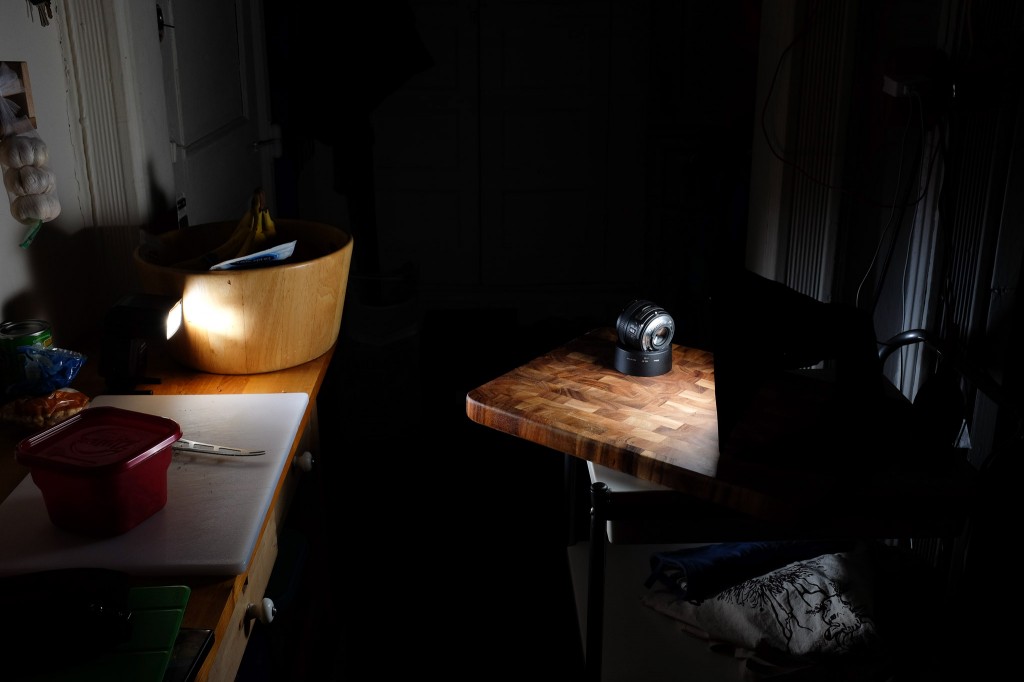 To set the flash levels first I started with no flash and made sure that I had my camera settings to make a pure black frame. That demonstrated that all the light in the exposure was coming from the flashes and none was ambient light from the room. 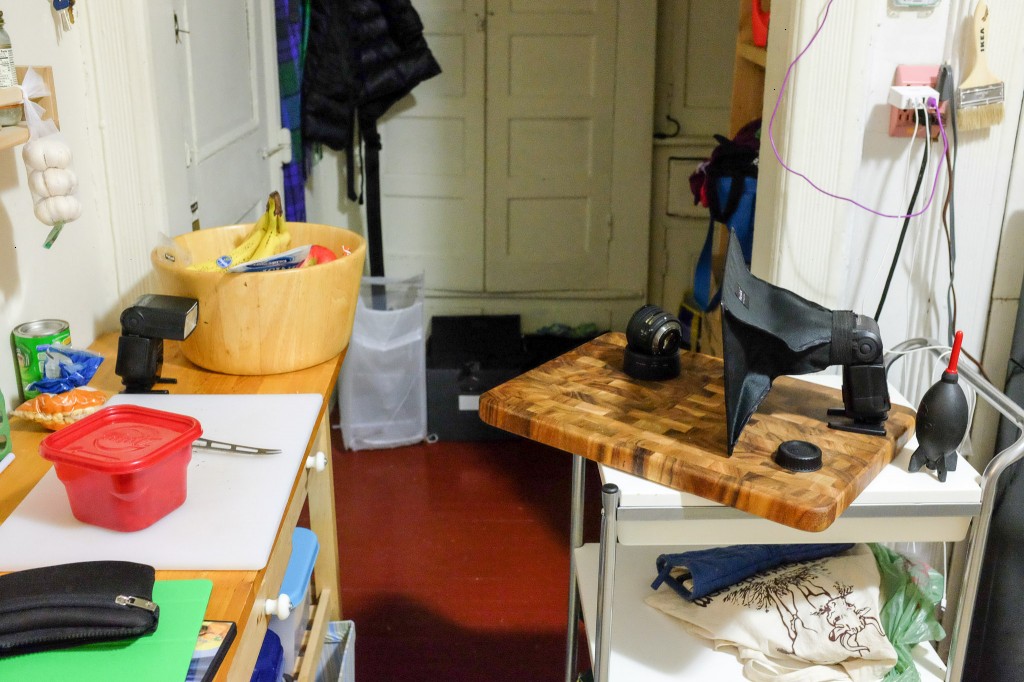 I set my camera to a shutter speed of 1/250s since that was as high as I could go and know that I would get full flash output on my wireless triggers (max sync speed). I probably could have gone faster with the shutter speed, but with stationary objects and low ambient light it was not necessary. I set the ISO at 400 since I trust the image quality on my camera at that setting. I could go a bit higher and get away with it, but since I am controlling the lighting I wanted to keep the ISO as low as possible to maximize image quality. I closed down the aperture since I wanted to increase the depth of field. I know that when shooting macro shots the depth of field becomes shallow. By shooting at f/11 I can increase the depth of field somewhat and have a better focused image. With these settings locked in I took a test frame with no flash and saw that it was pure black. 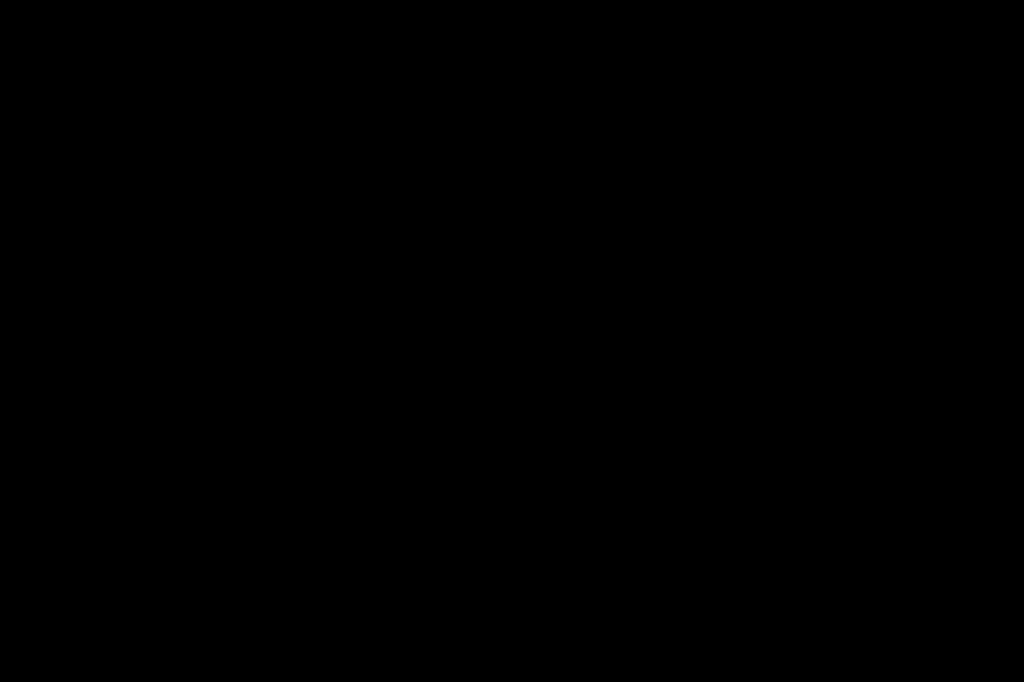 Next step is to add the lights. I started with 1/32 power on the softbox as a guess. I took a shot and saw I needed more light. I dialed it up and was happy with 1/16 power. I experimented with the bare flash and settled on 1/128 power, the lowest setting. 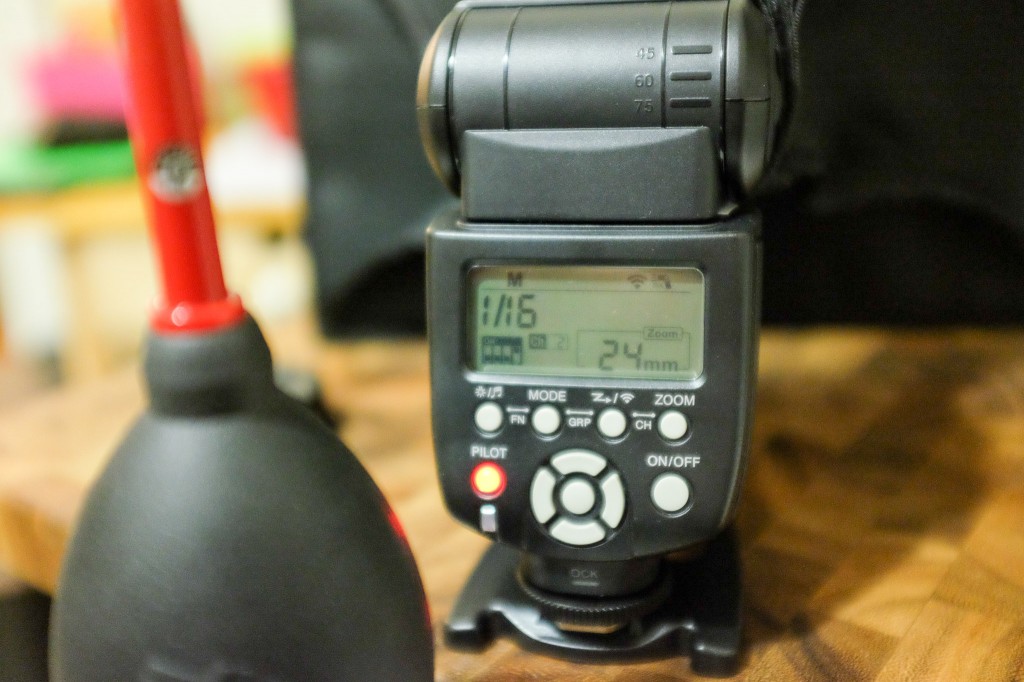 With the lighting locked in I took a bunch of pictures at different angles. I experimented with getting closer, farther away, vertical, horizontal and higher or lower. I was satisfied when I had a few usable shots of each camera and lens for sale. 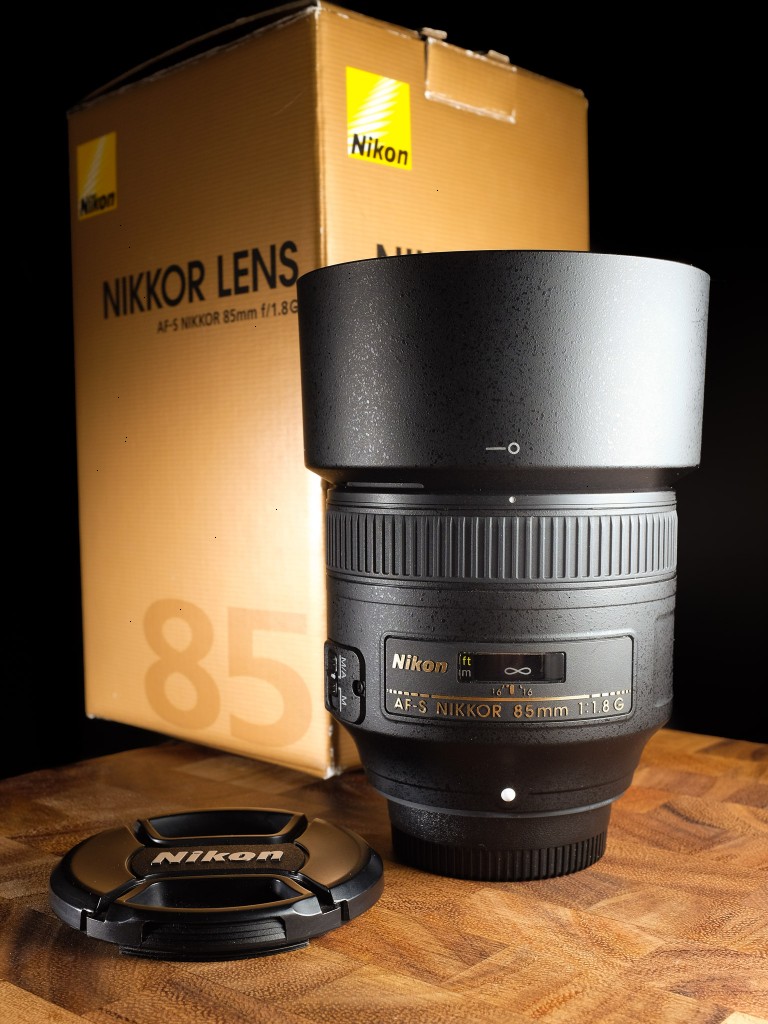 Once back on the computer I did some minor cleanup in lightroom. I adjusted the color temperature a bit warmer and dropped the blacks and shadows a bit so the background went pure black. But they are pretty close to how they came out of the camera. 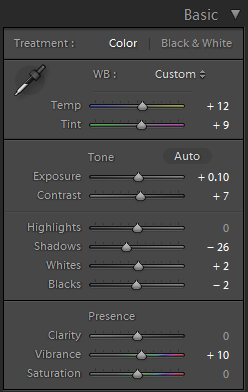 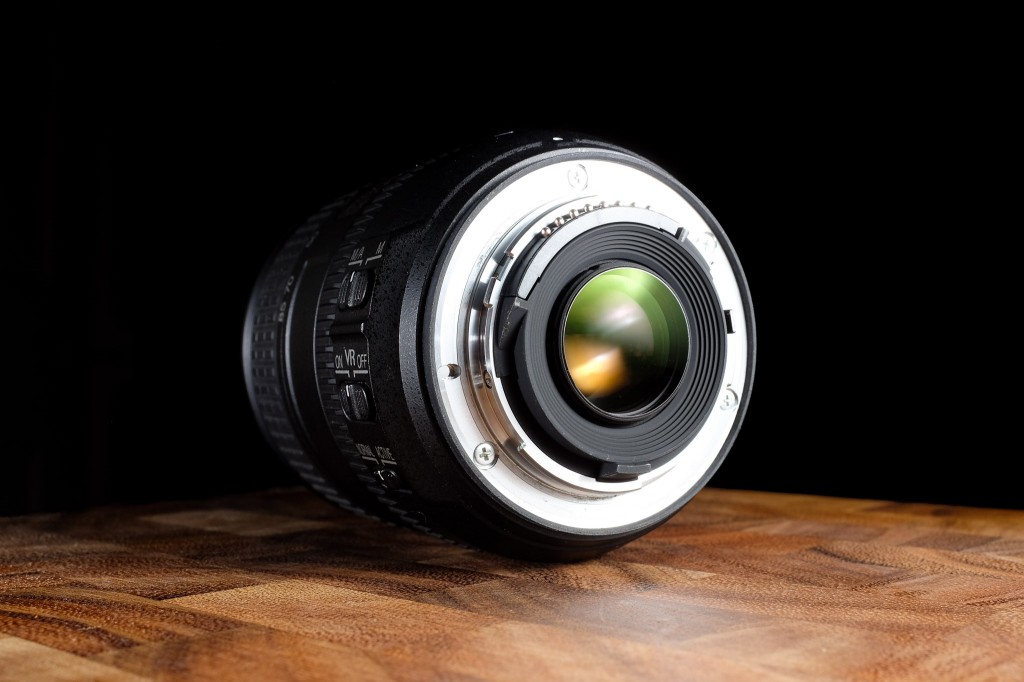 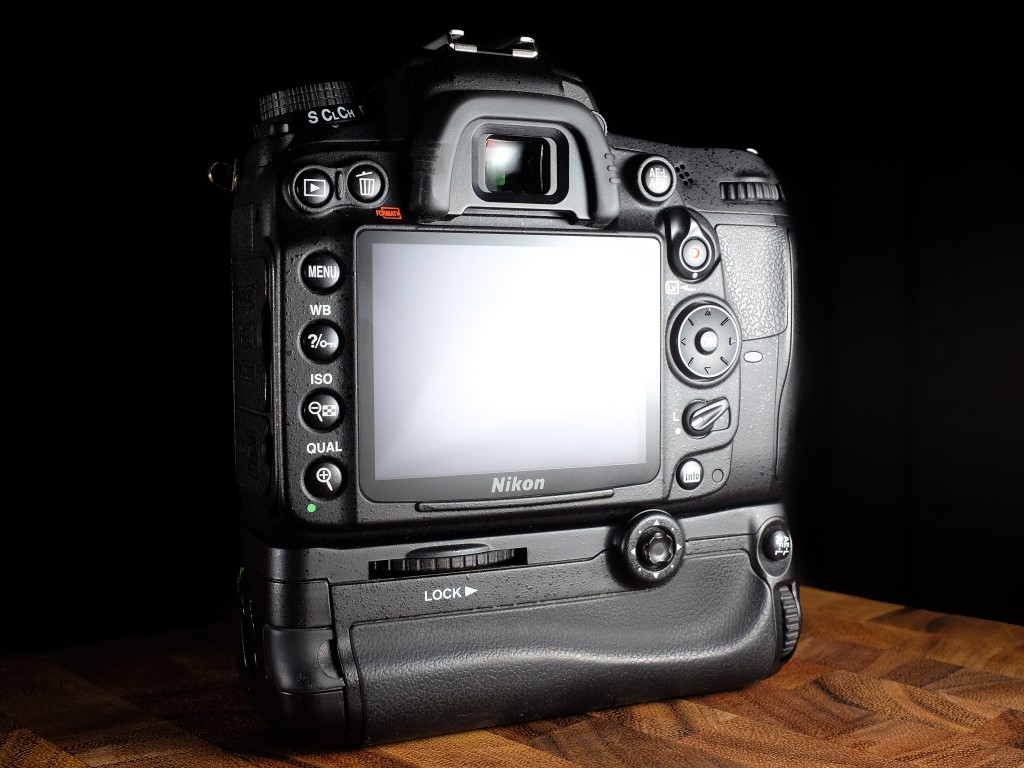 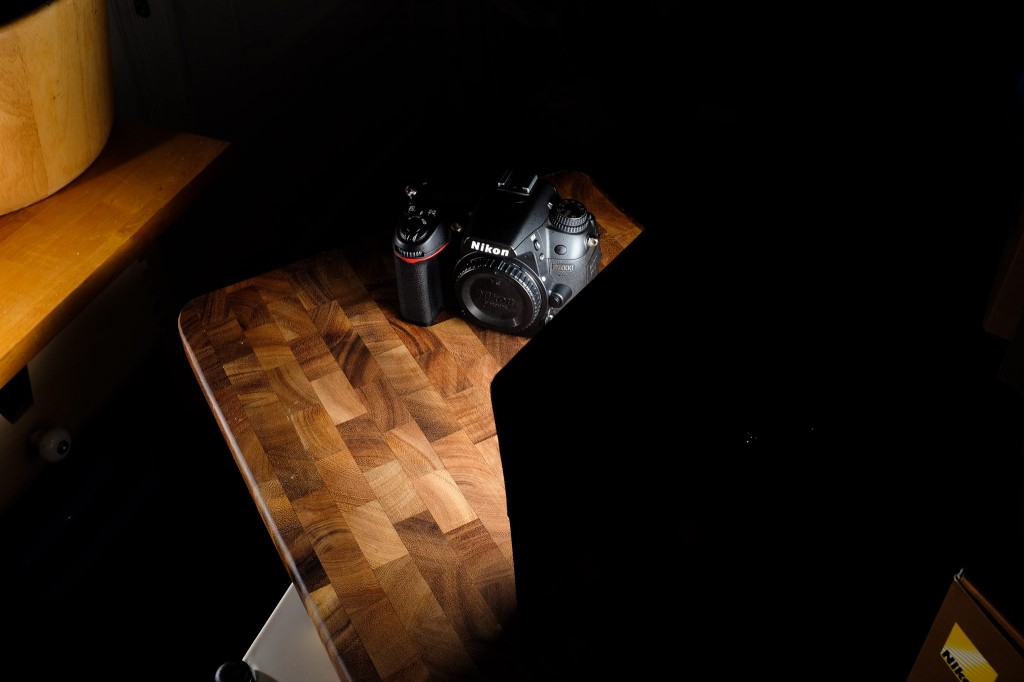 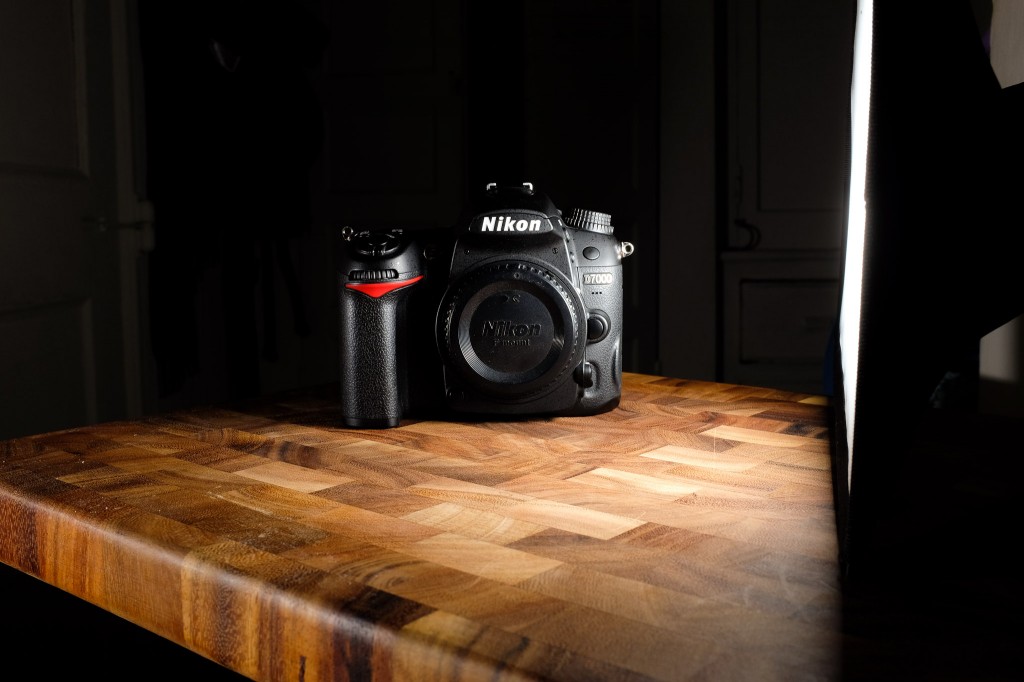